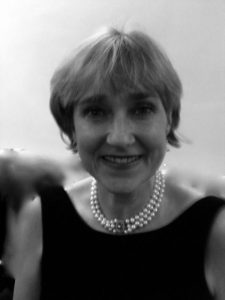 Jenny Wilson-Best is a professional soprano whose career as an opera and concert singer spans nearly 40 years. She was diagnosed with Multiple Sclerosis (MS) and has long been an advocate for singers with disabilities. Here, Jenny shares some of her experiences with the By Voice Alone team.

How and when did your interest in music and singing begin?

It was never a question of interest in singing and music. I never had dreams to be a singer. I was just always going to be a singer. My inspiration was the sea, earth, stars and the natural world.

Can you tell us about your background and training? How did you get started?

I studied at the Guildhall School of Music and Drama in London, and worked with the Royal Opera House between 1983 and 1988. I moved to Glasgow in 1988, where I sang with Scottish Opera for five years. I have sung as a freelance concert and opera singer ever since with companies such as Les Arts Florissants for 16 years and many of the major opera houses in the UK and abroad.

I remember when I auditioned for the Royal Opera House in Covent Garden (aged 22) and I very much wanted the job. As it happened, two letters came through the door on the same day. One for a full-time chorus position and roles at Covent Garden and another for a place at the Opera School at the Guildhall School of Music and Drama. I took the Covent Garden position and never regretted it.

What are you working on now?

I’m currently working with Scottish Opera, who have been enormously supportive. I also do a lot of teaching, which I really enjoy.

Tell us about someone who has inspired or helped you.

About five years ago, when my MS had rendered me unable to walk or stand for any length of time, I remember talking to Robert Jones, who was Staff Producer at Scottish Opera, about having to give up singing after 30 years of being professionally employed. His response was: ‘If you get offered the contracts because you can sing them then it is my job to make it work on stage for you.’ Because of him, I am still singing.

In your experience, what are some of the practical considerations affecting singers working with disabilities that affect mobility? And how can opera companies help?

There is some give-and-take involved. One has to be aware that one can’t always get asked to sing in every show. An all singing / all dancing show is not going to work, so one has to be realistic. That said, there are lots of ways that companies can offer practical support. Access to parking close to rehearsal venues and theatres, for example. Producers who use discretion about finding a way to fit you into their production. I really appreciate it when a producer contacts me in advance and quietly and respectfully asks what I can and can’t do – then tries to accommodate that in rehearsals. That’s a very different experience to hearing ‘Oh Jenny, I’ll do you later’ being yelled at you in front of everyone during the rehearsal process.

Great stage management is most important. I’ve worked with some amazing stage managers especially at Scottish Opera who put chairs at the side of the stage before I go on. They always know where I am and make sure I’m taken care of…all done with discretion and respect.

Can you give an example of how a company you have worked with has helped you?

The wardrobe department at Scottish Opera have been fantastic. For example, we recently did La Traviata with big, heavy period costumes and a big change of costume half way through. The costume department made me a completely new, light-weight dress with built-in, light-weight underskirts. They made a small cape so that I did not have to do the change of costume. Also, they made sure my costume was free from lacing at the back, as it’s very difficult for me to stand while a costume is being laced up.

Another consideration is shoes. Getting the right shoes is very important as they’re essential for being able to perform with a disability. They need to be flat, solid, well-fitting but still elegant (depending on the show of course). Massive thanks to Scottish Opera wardrobe department who make every show I do as easy as possible. They do this quietly and without making a fuss which is important to my self-worth.

What have you found unhelpful in your work?

Knowing all you know now, what advice would you give to any singers working with a disability who wanted to make a career for themselves in opera/music?

First, don’t assume that if your body doesn’t ‘fit’, that doesn’t mean your voice won’t. The voice is the most important tool for a successful career. Opera is about using the sense of sound – feeling your way through the sound in order to communicate – and that has enormous expressive potential. Second, speak up. Don’t be afraid to talk about your disability. Just because you have a disability does not preclude you from singing. It’s the job of the producer to make it work for you. Make friends with the stage management team!

What has been your proudest moment to date?

Being married to the love of my life for 35 years!

What has been your most incredible or terrifying performance so far?

Wow… that’s a tricky one. I’ve been an opera singer for nearly 40 years so there have been a few occasions! I think all experiences, either incredible or terrifying, add to life as a singer. A couple spring to mind, though. An incredible experience was sitting alone in the auditorium at Covent Garden and Pavarotti was rehearsing ‘Celeste Aida’ with the orchestra. I was the only person there, so I was the only person to hear this incredible singer.

I remember a terrifying moment. It happened when the men in the chorus were singing on a raised platform, and the stage in this particular theatre had a steep rake. The platform started to move forward and was heading for the orchestra pit. Everybody in the building was hanging on to that platform from behind with every ounce of energy we had!

Putting aside any disability challenges, are there any other challenges that you see in the opera industry for people starting out on an opera career?

Sing and work at it, but remember that there is luck involved too. I’ve certainly found this to be the case. My first job at Covent Garden coincided with their need for youth. I worked with Les Arts Florissants in France for many years, but this job also coincided with the fact that they were looking for a bigger voiced soprano at the time. I worked with English National Opera for many years but again this coincided with a Chorus Master who already knew my work. Yes, one needs to sing well, but sometimes you’re just in the right place at the right time. Take any opportunities that come up. If it doesn’t work out, then so be it. But if it does…

What would you say to anyone thinking of auditioning for By Voice Alone?

You can see Jenny in action on YouTube: Here she is, singing ‘O mio babbino caro’ in aid of REVIVE MS Support.

Apply for By Voice Alone

There’s still time to apply for By Voice Alone.

The closing date for applications is midnight Thursday 28th February 2019 for the live auditions and midnight Sunday 31st March for recorded submissions.