By Voice Alone – Crunching the Numbers (Part I)

After some incredible singing, the first By Voice Alone competition is at an end. Crunching the numbers has been as interesting as the wealth of talent on display. So if you like statistics, here’s a first brief peek at the overview.

Out of 424 participants, only 397 gave us data relevant to our discussion, so the percentages here are based on those 397 rather than all 424 participants. Out of the 397 participants, 35 identified as BAME – 8.82%, which is only marginally lower than the percentage of people who identify as BAME in the UK. According to the 2011 census, approximately 13.6% of the UK population identify as BAME, including white minority ethnic groups (source: Government Census Data).

241 participants identified as coming from a middle or upper class background – a whopping 60% compared to only 85 (or 21.4%) identifying as being from a working or lower class background. This is slightly harder to compare to the UK population as a whole as class is largely self-defined. However, these figures are highly unbalanced and indicate a lack of people who identify as working class in the profession.

Additionally, a staggering 61% of participants were sopranos (but that’s for another day).

This is just a first crunch, but already it tell us this: our profession is overwhelmingly white, able-bodied, and middle-class. As if we didn’t know already.  There are 170 permanent choristers working in UK opera houses. At the time of writing, fewer than five are from a BAME background. If taken as a representation of the UK population as a whole, that number should be 22. As far as By Voice Alone is concerned, 1 in 11 applicants identified as BAME. By Voice Alone has shown that a more diverse artistic pool is out there. The industry just isn’t using it.

Writing in The Guardian in January 2019, Arts Correspondent Mark Brown noted that opera is “shockingly white”, a view backed up by ENO Chief Executive Stuart Murphy, highlighting the issue that classical music has a tendency to “hire its own” – not just in terms of ethnicity, but in class, and gender too. His undertaking to actively look to recruit chorus and extra chorus members from a BAME background is a positive move. As he says, the industry overall is “getting it really, really wrong”. If audiences don’t see someone onstage who they can relate to – either the character or the actor – they will most likely lose interest in the art form. ENO is taking steps to address this, actively looking to recruit BAME choristers – their first-round chorister auditions are now also judged ‘by voice alone’.

The barriers aren’t just for BAME artists. Money talks to money, and privilege can be paid for. Without exposure to classical music or access to the individual lessons, the masterclasses, the summer schools, the orchestral and choral courses early on, you’re already at a disadvantage before you even consider tertiary education. “What about scholarships?” you may cry. If you’re not even able to access the level of tuition early on that might put them within your reach, they might as well not exist. One of the By Voice Alone semi-finalists had not been to a conservatoire. Both encouraging in terms of the competition, and disheartening when you realise that the “it’s difficult to get on if you haven’t been to college” narrative is, in fact, true.

Theatres and performance spaces might be making themselves increasingly accessible to disabled audience members, but backstage and onstage is still frequently off-limits to disabled artists. Disability comes in many forms – hidden and visible – and shouldn’t be a barrier to a successful artistic working life. Scottish Opera is a wonderful example of how an opera company can embrace disability and work to overcome limitations backstage. For many years they have worked with soprano Jenny Wilson-Best, offering practical support which enables her to continue working with them.

You can read more about Jenny’s experience of living and working with MS here. 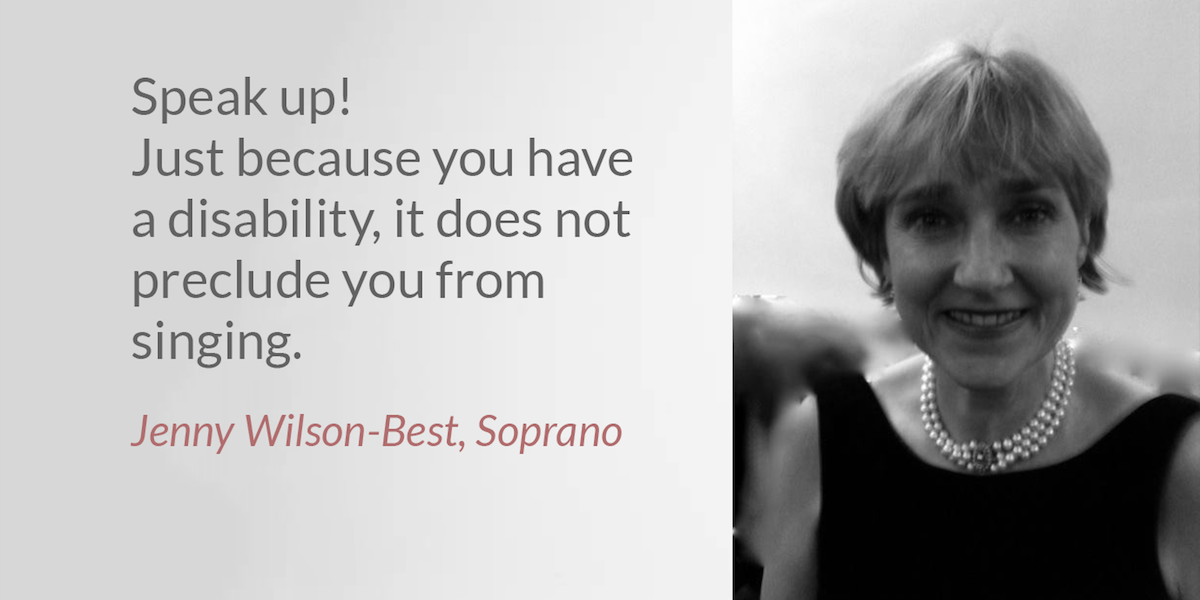 Less significantly perhaps, are the minor digs, pokes and prods that all of us suffer in this profession, whether we’ve had every advantage or none. We all get older, and often develop a degree of middle-aged spread. Grey hair and wrinkles make us significantly less castable as the juvenile lead, and we all have home responsibilities, whether caring for children, parents, or partners. At the time of writing, the MP Stella Creasy has bravely gone public about her perception that she has to make a choice – parent, or politician. She has received, inevitably, the usual social media brickbats, which have, once again, brought the spectre of women being expected to put aside their careers in favour of motherhood to the forefront. When the blinds went up at the By Voice Alonesemi-finals, two participants were pregnant, and two more had young babies.

By Voice Alone has provided a platform for singers to perform on a slightly more level playing field. The fact that participants in the first round weren’t discriminated against for their education, ethnicity, age or disability, for example, has meant that the competition has seen a much more diverse range of participants than that of singers currently employed by the nation’s opera companies. It is clear that the industry has to change, and By Voice Alone positively shows one of the ways in which we can implement change. By Voice Alone gives everyone the chance to be judged ‘by voice alone’.